The PPU Annual General Meeting will take place on April 6th. at 7 pm in the school and we urge as many past pupils as possible to come along and make your voices heard. The committee has been very busily engaged over the last few years with the 150th anniversary events and the publication of Cuimhneachan which was launched at the annual dinner in January. We are still hard at work on projects to commemorate 1916 and will shortly be announcing important events to remember past pupils who gave their lives and who participated in the struggle for the freedom we enjoy today – watch this space. In the meantime, we look forward to seeing you on the 6th. when all the old geezers in the photo below will be up for re-election. Jim Conway, PPU Hon. Sec. 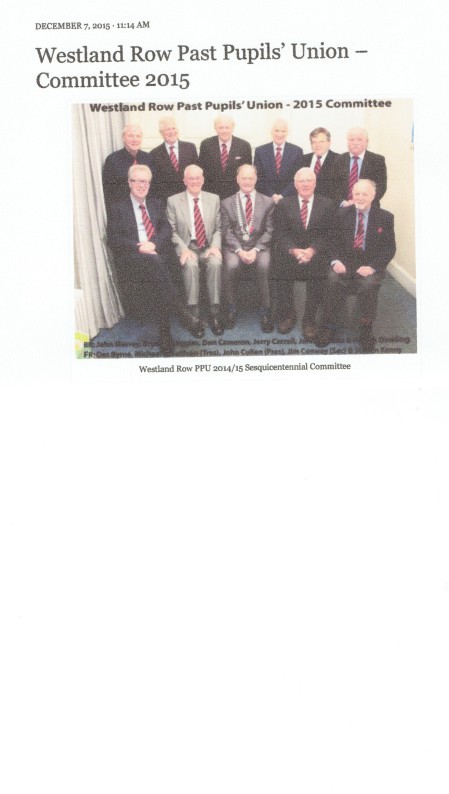 Past pupil Eoin Meehan MSc CITP FICS has thrown his hat into the ring as a contender in the upcoming Seanad race and is seeking support from fellow past pupils. Eoin is a very interesting character and it would be great to have a past pupil in the “corridors of power”. Eoin was actually born in London in 1962. His parents (both Dubs) had to emigrate due to economic circumstances but they brought the family home in 1964 and Eoin started school in Clarendon Street (where the Westbury is now) and then Westland Row. on graduating in 1979 Eoin did a computer programming course in AnCO (the predecessor of Fas) and developed a very keen interest in technology. Eoin kicked off his career as a commercial programmer working with a number of Irish software houses, in the early ’80’s.

In the late ’80’s Eoin started working with public data networks, as well as modems and dial-up (Remember that?) and then moved to a campus company based at UCD that allowed him to work with the Internet.

Eoin worked with Intel as a senior engineer building the production control systems for the new FAB14 manufacturing facility at Leixlip in the late ’90’s and also with Bank of Ireland on numerous occasions as an electronic messaging specialist and a Unix specialist.

In 2006, Eoin fulfilled a long held dream of attending Trinity. He was accepted as a mature student for direct access to a M.Sc course. Two years later Eoin graduated with flying colours with both his parents present on a very special occasion.

Since leaving college Eoin worked with an Irish company in the mobile the mobile telecoms industry, helping to build their consultancy division from 0 to 15 consultants working world wide and also as a senior consultant with Dell in London, specialising in technology transformation programmes for very large organisations.

Eoin also worked in TCD on an EU FP7 project – Networks for Communications Challenged Communities (N4C). Lately, Eoin co-founded a small start up , Sprism Ltd. with a colleague from his M.Sc course, Peter Williams, and they are working to commercialise his doctoral research into data dystems into data analysis and visualisation. This brought Eoin into the start up ecosystem and engagements with Enterprise Ireland, NDRC and others.

Eoin is a member of the Irish Computer Society and the first Chartered IT Professional to be chartered by the ICS. He is also a fellow of the Society.

In his spare time Eoin is a recreational motorcyclist and enjoys war games with his (now grown up) children. He also dabbled in martial arts and has progressed in Laido, the Japanese samurai sword art. He is also a sci-fi fan, plays the flute and was a member of the Irish Youth Orchestra and the Westland Row Concert Band.

The above is a brief Bio of Eoin and more details are available on his website http://www.eoinmeehan.com, Facebook and Linkedin.

We wish him well in his efforts to make the Seanad.